If you are an EEA-resident and attend education to obtain your nursing degree, the programme below is meant for you.
Feel free to contact us if you have any questions after reading this information.

Surely you’ve heard about the hospitality and the open-hearted vibe of Amsterdam? 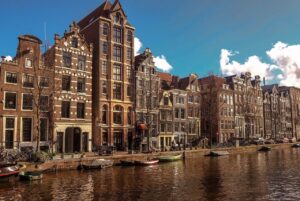 It is a meeting point for all different cultures around the world as well as a beautiful and romantic place with its antique houses, lovely bridges, famous canals and of course the list of world class attractions!

This progressive city is known for its cutting-edge contribution to the arts and culture, business, politics and social policy, and also for its historical importance

…and it’s awaiting to welcome you!

In healthcare, the Netherlands is among the TOP 10 countries in the world, and within Europe – second only to Switzerland. In this environment you are invited to join the Eduployment Erasmus+ internship programme for EU bachelor nurses.

An internship abroad contributes greatly to your personal development. You get to know a new language and new culture. It looks well on your CV and increases your chances of finding the work of your preference in your own country.

But above all, it is a great experience and therefore a perfect conclusion of your life as a student.

It may be a once-in-alifetime opportunity.

To take advantage of this opportunity, you must learn the Dutch language up to the level A2 (general and professional) – we provide free Dutch language lessons, the lessons are online and take place alongside to your main study. All you have to pay for is your digital textbooks from the publisher: € 57, – for the first 45 lessons and then another € 59.50 for the remainder of the lessons. You will receive approximately 80 lessons in total. You do not have to pay for the teacher and the feedback on your homework. Taking tests is also free for you.

Once you’ve finished studying and attained the Dutch language level A2, you come to Amsterdam, settle in your free accommodation with free WIFI provided by us and start your internship at the Amsta Care Centre.

You will be committed to at least 6 months of internship with a choice to extend it to 12 months, so all investments in your preparation and support are justified.

We ask a small deposit of €350, – this deposit will be returned to you after finishing the Programme. The deposit can be paid at once or in 2 parts: the 1st part before the start of the programme and the 2nd part 2 months into the programme.

In addition to the free language course and on top of the Erasmus+ scholarship* and free accommodation with free WIFI, you will receive (during the entire internship period):

You will have a possibility to become a participant in the follow-up programme ‘CV boost’ from the 4th month of your internship, in case of mutual satisfaction, with even more benefits, such as:

*Your university can give you more information about the Erasmus+ scholarship.
**See: www.efteling.com

Amsta specialises in the support, care and nursing of people with physical disabilities, dementia and/ or intellectual disabilities, as well as people who need ambulatory guidance. Owing to the knowledge and experience in the fields of Korsakov, long-term psychiatric problems, short stay recovery and rehabilitation, Amsta occupies a leading nursing position in the Netherlands.

More about Amsterdam and the Netherlands

Are you eager to take an independent, fresh look at the world – and yourself? Let Amsterdam redefine your perspective. This progressive city is known for its cutting edge contributions to the arts, business, politics, and social policy, and for its historical importance as well.

Amsterdam is one of the most popular destinations in Europe, attracting over 7 million international travellers annually. It is a true cultural haven with festivals all year round.

The 17th-century Canals of Amsterdam were listed as a UNESCO World Heritage site in 2010, contributing to Amsterdam’s fame as the “Venice of the North”.
Amsterdam is a city that will get under your skin in the best possible way. The sense of history, serenity, landscapes and diversity combine for a peaceful yet impetuous mix. This makes it one of the most romantic and beautiful cities in Europe.

And Amsterdam is the capital city of the Netherlands, the country that holds a steady position among the world’s top places to live and work in. It may be a small country in size, but certainly not in impact. With its liberal social policies, maritime trading traditions and fight to keep the sea from land, its robust multiculturalism and leading technological communication, the Dutch lifestyle is a mosaic of cultural intrigue.

The Netherlands has a rich history that is still visible in its cities. Because of the short distances, they can be reached quickly. No precious time is lost because of long travel times. The public transport and the road network are of high quality. Everything is within easy reach.

It is also the land of clogs and windmills. Of rivers and canals. Of bicycles and boats. Of green polders and beautiful cities like Amsterdam and Utrecht. It’s a country with truly wonderful and truly curious sides: wide sandy beaches, brightly coloured fields of tulips, spotted cows and artists that the whole world comes to see. These are some of the reasons what makes your stay or, indeed, life here so unique and cool!

Are you interested to join our Erasmus+ internship programme for nurses?
Apply below with your CV and motivation letter in English
Apply now!